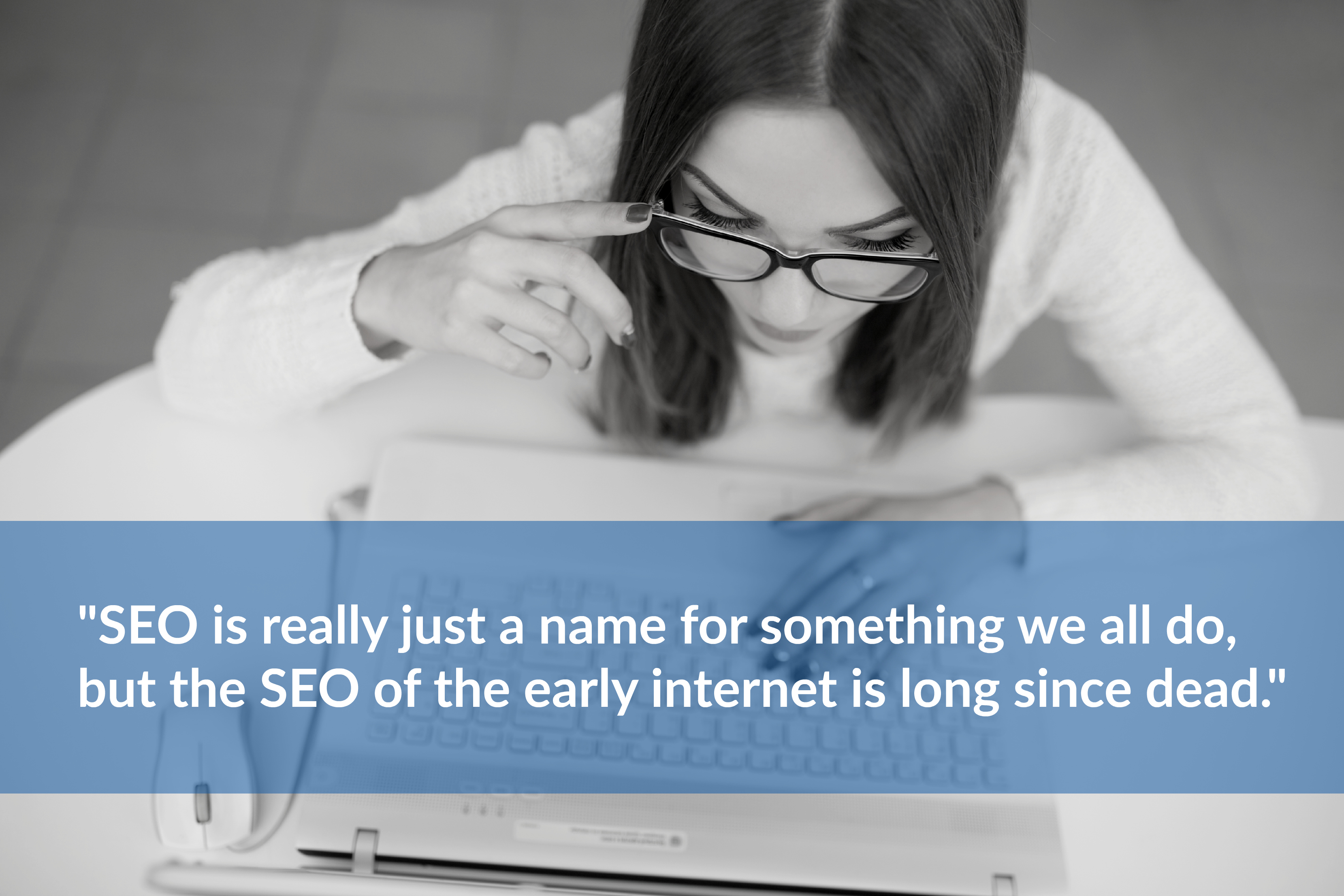 The History of SEO: What We Did as Cave(wo)men Optimizers

As part of a good Search Engine Optimization (SEO) program, industry research is an ever-present part of what we do. New tactics are constantly being pushed out by gurus and newbies alike among the major SEO blogs. The ability to sort through all of the fluff and find the really good tactics is part of the game in this business. Sometimes it can get overwhelming even for the most-seasoned SEO expert (which I do not proclaim to be in the slightest). However, over the past decade (or almost two…yikes!) we’ve learned there are a few techniques that are fairly evergreen. We have learned the basics of a good SEO strategy and adapted it to be as relevant as possible. Of course there are always going to be cutting-edge SEO techniques that can get you some major traffic, but they can also majorly hurt you and that’s something we urge our clients to avoid.

What we have learned is that the basics, if done correctly and regularly, can take you pretty far when it comes to a good SEO strategy for your website. These tactics are the ones most people already know about. This is making the search market even more competitive and forcing web masters to come up with new strategies to continue to drive users to their websites and convert at an even higher rate. For those of you that are less familiar with SEO, or are looking to revamp your campaign, these old SEO tactics combined with a new mentality and approach to SEO are going to be what really make the difference for your SEO campaign. But before we get started with that, let’s begin with a little history, learning from past mistakes so that we’re on the same page about what NOT to do when it comes to SEO. Then we’ll be on the right foot to jump into what we do as an SEO agency with techniques that we’ve tested and found successful time and again.

Although Google’s standings have dropped from last year with various competitors like Duck Duck Go and new Microsoft campaigns, they still hold a feisty majority with 64% of the market share.

We can all agree that Google holds a monopoly on the search market. When SEO was first blossoming into the world, this was the only goal: outrank competitors in Google (because everyone finds everything through Google) by any means necessary. When the internet was much smaller, this was not an outlandish goal. Web developers would use keywords in anyway necessary and inject them into every last corner of a website to rank because that was how Google worked. However, the internet has grown, SEO has evolved, and it is well past the time when everyone should catch up.

SEO is really just a name for something we all do, but the SEO of the early internet is long since dead. Google is not what really matters anymore. Sure, ranking in Google can be a goal, but you should have other goals too. And most likely, those other goals are probably more important. Because at the end of the day, your company needs to make a profit. Sometimes ranking on the first page in Google for every possible search term is not necessarily the best way to accomplish that goal (at least when it comes to SEO.) Now stay with me. I’m not saying Google is not important and I’m NOT saying you don’t need to rank in search engines. I’m merely trying to help paint the bigger picture. SEO tactics in today’s world are much more about the user and the people than about the search engines.

Working Towards Goals that Make Sense

The search engines (the actual algorithms themselves) are now much more human-like than their early days of keyword-stuffed result inefficiency. After more than a decade of refinement, the geeks at Google have found a much better set of algorithms to emulate what people are looking for to give them more accurate results—and this algorithm is only going to keep getting better. Additionally, as more companies enter the internet marketing realm, the market for your client’s particular service is just going to keep getting more competitive. If your only end goal is still to rank better on Google, then by all means, follow everything they do and tweak your tactics accordingly. To me that sounds exhausting. I’m in the business of evergreen solutions. So instead of chasing Google, I’d rather figure out the end game and meet them at the finish line. Then the rest of my day is free to work on a bunch of other (more productive) projects to help my clients market their websites in other ways.

This style of approach to SEO has helped our clients be more successful, and ultimately meet their own primary goal of increasing revenue. I’m not saying you should drop everything, throw out your prior knowledge, and jump on some crazy new SEO bandwagon. By all means, if you’ve found tactics that have been successful for one client or another, don’t let them go. Your client’s success is not going to follow one similar prescribed pathway. Each client is different, as are their needs, and their consumers. What I am saying is that, after more than a decade of doing SEO, it’s time to refine our tactics, change with the evolving landscape, and stay on top of the game by marketing to the consumer instead of the search engines. Yes, I did say consumer, because in today’s internet marketing age you have to find people the way they want to be found and that is unique to each individual.

My hope is that by illustrating some of the tactics we’ve found to be successful, you’ll add a few new skills to your toolbox and start to view SEO in a more holistic way. And that ultimately, these tactics will lead you and your clients to greater success.

In Part II of this blog post, I’ll uncover the strategies we’ve researched to be the most successful in our SEO campaigns so that you can use them to strengthen your own SEO tactics.