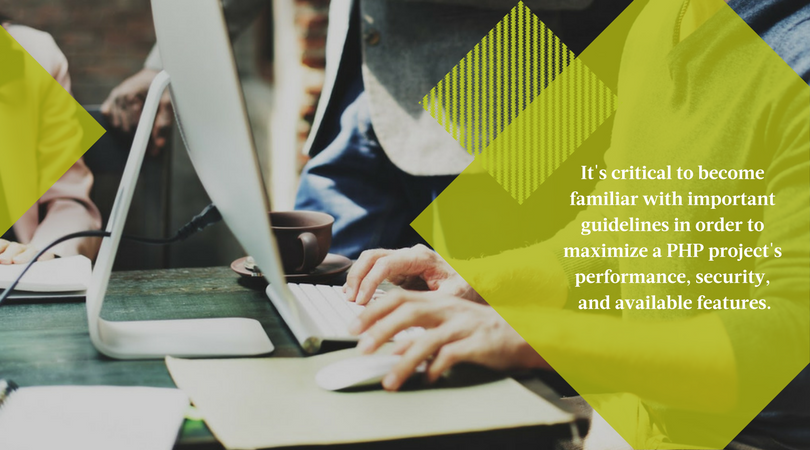 When it comes to custom web applications, software platforms, or web enabled APIs, it’s critical to become familiar with important guidelines in order to maximize a PHP project’s performance, security, and available features. The developers at Go Local Interactive are always working to stay on the cutting edge of application frameworks and tools to provide the best products possible. A few points to consider for web application development include:

Over the past 15+ years in the PHP development community, a common set of standards has been established in order to assist developers produce code that is consistent, easy to understand, and easy to implement across multiple systems and projects. Established by the PHP Framework Interop Group (PHP-FIG) these standards include best practices for code formatting and styling, namespaces and interfaces, project organization, caching, and incorporating 3rd party packages. Future standards being drafted include standardized documentation, standardized reporting, and an extended coding style guide.

When a team of developers are mindful of these standards and incorporate them into their development routines, a significant source of friction is eliminated and project development becomes more streamlined and its associated team members grow.

In the past few years, several great PHP frameworks have been produced or have received significant updates in order to take advantage of updates to the core of PHP in both 5.6 and 7.0 versions. An application framework such as Laravel or CakePHP will provide much of the needed scaffolding “out of the box” to provide core application services such as database connections, structured database queries, caching mechanisms, user authentication, and more. Laravel, in particular, has rapidly added common functionality into its core framework.

The power of these frameworks is to save developers the time of writing (or rewriting) boilerplate code that does not change from project to project. Given the inherent limitations of time and cost for typical projects, this allows developers to focus their efforts during a project build on implementing required business logic.

No software framework can reasonably be expected to ship with every possible popular feature included, so modern frameworks implement standardized 3rd party plugins, or packages, that enable developers to include functionality critical to a project without having to write it from scratch. A popular example are packages that allow projects to take advantage of the many services provided by Amazon Web Services – packages are available to incorporate email functionality, text messaging, EC2 server management, Route 53 DNS management, and more.

Other common packages include geolocation services, advanced debugging and testing, social media integration, and API scaffolding. Like the framework itself, taking advantage of this broad developer ecosystem allows more time to be spent on implementing the business logic that is truly unique to the project.

Given the availability of frameworks and 3rd party packages, most modern projects can be built very rapidly with shorter feature iterations, allowing project stakeholders, managers, and developers to quickly assess its status at any point and adjust development goals and timelines with minimal downtime. If a project suddenly requires implementing a popular feature for a well known framework, very often a package already exists and can be quickly added, preventing one or more developers from having to pivot away from their current tasks and eliminating more potential friction.

5. Be mindful of best practices for security

Modern PHP application frameworks have become very security conscious as the web itself has grown. Malware and malicious users are always looking to take advantages of any cracks in a website or web application, and developers must begin early in a project to ensure that the software they write, coupled with the hardware being used, meet security best practices. Framework developers themselves are constantly adding new tests to their projects to improve security, and it’s vital that developers using the framework do not undermine those efforts.

It’s also highly recommended to include 3rd party security experts and security services especially if any form of ecommerce or online payment is required.

6. Test constantly and automate whenever possible

Application frameworks will often ship with basic unit testing, integration testing, and acceptance testing included. Developers should be sure to include at least one of these methodologies when building a project, and investigate implementing automated testing environments such as Selenium or TestingWhiz. This will help prevent software regressions from impacting a project as it grows.

The potential downside of rapid application development is that it can become too easy to add features to a project. If left unchecked, this can easily lead to project bloat, which can reduce software performance and add unnecessary complexity to a project – limiting the direction of future growth and adding to the time needed for future developers to join a project.

During a project build, stakeholders and developers alike should always ask: What is the core set of functionality that makes this project worth building? What are the core services needed that this application provides? Is it possible to spin off a newly requested feature into a separate project or package? Be critical of these guidelines and you will surely maximize your PHP project performance.